My drums are DW Workshop Series, made in the U.S. in 2000. There is much confusion surrounding this somewhat-rare line offered by DW.

I have read a lot of messages of people inquiring about DW Workshop series drums with most replies having bits and pieces of truth with some personal opinions thrown in. Lots of readers want to know about thier quality and their price range. The Workshop series for the record were indeed 100% DW drums. They were manufactured in the USA (Oxnard), contrary to what some people have been stating. They were never made in Ensenada, Mexico. They were manufactured with what resembles the PDP lug to distinguish them from the Collector series.

They were built for only two years. They were made without reinforcement hoops, and were meant to be DW’s good, mid-range product. Since they were just as expensive to manufacture as DW’s Collector’s Series, they were discontinued. Apart from that, they were favoured by many DW endorsers in spite of the Collector’s series.

They were DW’s first go at manufacturing an American made “mass produced” set. They didn’t offer the custom features like timbre matching and had limited finishes. The finishes were a high-gloss lacquered all-maple shell, or a Satin-Oil all-maple shell. The drums, aside from the different lugs, garnished authentic DW hardware as in the snare strainer. bass drum spurs and tom mounts. Again, 100% DW. DW dropped this line after about 2 years in production because they became too costly to produce, rivaling the production costs of their collector series, but they didn’t carry the same retail price tag.

So with that, the line was scrapped in favor of the Pacific line. With the technology they gained making the Workshop series, they started to produce the PDP’s in Taiwan. Pacifics were not originally manufactured in Ensenada. DW chose to move the PDP line to Ensenada in the mid 90’s to keep the costs down on the shipping tarifs from overseas and to be closer to the factory for quality control. But to state it one more time, the Workshop series was an American manufactured all-maple set. The sound is impeccable and they do not have the reinforcment ring for a broader sound, something DW is now offering (priced) on their Collector series sets. All the Workshop series drums have a DW badge with a serial number stamped on each shell stating “Made in the USA”

The Bottom Line Facts: These drums were “Made in the USA”, with the same quality maple and parts that go into the Collector’s Series drums. The only difference- apart from the differently-shaped lug housings, is that these have no reinforcement hoops. This difference is said to give them more sustain and a more open tone. I completely agree. I didn’t buy these because they were less than the Collector Series: they just sounded better, more open, to me.

As said, they are made entirely of American maple. On my set, the finish is a very beautiful glossy Teal Green (like the British Racing Green on the Tama SC’s) with natural wood color inside the drum, as well as around the inside of the bass drum hoops. The rack tom mount is brilliantly designed and allows you to place the drums absolutely anywhere you want them to be without hassle. The toms themselves feature DW’s suspension system that retains sustain and overall tone quality. So far, this is the best set I’ve ever played and it is still unbeaten by the Collector’s series in my opinion. 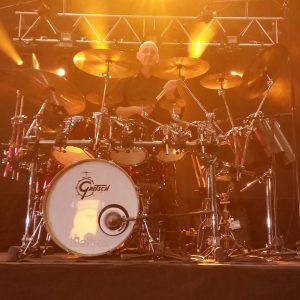